This is the third comment in a row..And I am the third user in a row to explain that there is a 10 word roleplay minimum. xD Come on guyysss, ten words..EASY AS CHIPS.

Iciclebreath padded in, yawning as she entered. She observed the den before going to her nest and lying down. 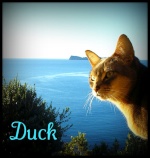 He smirked at Morning, "Hey, female." He chuckled as he awaited her reaction.

"Who are you calling "female"?" The she cat cocked her head and gave a smirk. "I have a name, you know."

His smirk never faltered. "I think 'female' suits you better by far."

A fluffy black-almost brown she-cat bounded in. She tiredly slumped down in her nest and gave a small smile to Cunningbreath and Morningflower.

A grey she cat walked into the warriors den. Her paws dragging as she yawned with sleep. Finding her nest did she go to it and lay down, dozing in and out of sleep.

A jet black she-cat lay on a moss nest, with a leaf right next to her that she put there for good luck. Shadowclaw stared blankly at the exit of the den, draped with vines. (I don't know if it is, I'm making this up in my imagination. If it doesn't have that I'll just remove that.) Nightglow went missing, and she was her best friend. Tawnypelt had died, now she's probably dead too. She drifted her stare to the luck leaf, and angrily shredded it, leaving a clawed leaf on her nest as she quickly sat up and began to walk out of the den. The one thing left of Tawnypelt was her kits, might as well visit them today, but first she wanted to hunt.

Snakehiss entered, yawning in exhaustion. He went immediately went to his nest and lay down. 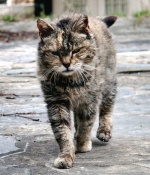 The tom nodded his head to the she in greeting before turning back to Morning and chuckling. "I know."

MorningFlower rolled her eyes at Cunning. "Whatever. Wanna go hunt, Meanie?" She grinned batting out a paw.

A young stone furred she cat walked into the den. She was exhausted from the long day of hunting and other stuff. Yawning as she found her nest, plopping herself down with a thud and then looked about as she readied for sleep to take her over.

He smirked at Morning. "Sure, female." He stood up and stretched.

Feralclaw looked around the den slowly, everyone else was happy and calm, unlike him, sad a panicked

She rolled her eyes, stretching. "Whatever, Fuzz-Brain. I'll beat ya there!" She grinned and pelted out.

NightGlow awoke in the comfortable moss nest in the Warrior's Den. It was the first rays of dawn, and every cat was either sleeping silently, or snoring loudly. Night got up and stretched, she had a pleasant dream. She had dreamed of a large moor with short grass, with so many flowers and the pleasant smell of catmint. ShadowClaw was in the dream too, like usually, the best friends usually shared dreams, walking in each others freely, lucid dreaming and having fun. In the dream, they had been picking flowers and then batting at them like little kittens, but instead, ShadowClaw was leader, and NightGlow was Deputy in the dream. They looked like yin and yang, except they were both black. She smiled at the stirring body of ShadowClaw in the nest right beside hers. ShadowClaw yawned and looked up. "Shared dream again, Night?" She asked, smiling. NightGlow nodded, and licked her friends ear. "Let's go watch the sunlight and mess around with the flowers like in the dream, Shadie!" Night mewed, and walked out of the den with ShadowClaw. They went down in the clearing of the camp, and quietly started to playfully bat sheathed paws at each other lightly, then pick flowers and throw them on each other. ShadowClaw let out a mrrow of amusement as a flower she threw landed right on Night's head. NightGlow smirked and tackled her, and they became a rolling ball of black on the fresh green of grass, looking like kittens on their first day out of the nursery. Ever since NightGlow and her joined SombreClan as kittypet kittens, ShadowClaw, ShadowKit back then, was her best friend. They continued rolling along, until they were both worn out. ShadowClaw lightly kicked her off with her hind paws. NightGlow landed with an oof on the ground, on her back, next to ShadowClaw, her head next to NightGlow's head, both facing opposite directions. They both panted. "I wish we were still kits." She said. "I know, it was awesome." ShadowClaw agreed. They both watched as the sun rose up over the faraway mountains, sharing tongues, chatting about nonsense, and once again acting like kittens and having playfights. They might be warriors now, but they would never lose their innocence, their spirit, their bravery, or their endless silliness. But they also had the weight of the clan on their shoulders, hunting for the clan, patrolling for the clan, fighting for the clan, caring for the clan, and they still held a balance of maturity and playfulness, not inexperienced nor stern and boring. They were best friends. "Your awesome." ShadowClaw said. "You're more awesome!" NightGlow retorted. "No, you're more awesome!" ShadowClaw argued playfully, batting a paw at Night's ear. "No way!" NightGlow squeaked, and they started playfighting again.

"Whatever," He laughed as he raced out after the idiotic she-cat.

HowlingStar nimbly trotted past the warrior's den. He peaked inside then hurried away.

I should probably go eat Feralclaw thought, agreeing with a deeper sense of mind, She's not coming back, i might as well try to change. he smiled before stepping out of the den.

Smokeclaw smiles and look around the den. she thten got ip anhd says" does anyone want to go hunting with me?"

MorningFlower trotted in and looked over to SmokeClaw, dipping her head, giving a slight smile.

Miserycloud slipped inside the warrior den; exhausted and tired from the busy sunrise.

Blood? Why is there so much blood? "Because Feral, this is what you must do. You must return to your old life." A mysterious voice meowed You must kill again...... "Never!" he hissed in defiance "This is my new life! I control it!" he meowed in anger

He awoke startled, looking around seeing his clanmates again and thought That was disturbing

Hazelcloud padded in, just to eat her prey. She looked at Feralclaw, and noticed his expression. She padded closer, and set her prey down. "You okay?" She asked, looking towards him, and then taking a bite of the frog she had acquired from the freshkill pile.

"Y-yes." he stammered still shocked from the dream he had "Just a....memory." he said "A very Scary memory." Feralclaw shook his head "From my rouge life."

Her light brown-beige ears drooped slightly in sympathy for the cat, her creamy brown eyes glazing over with interest and curiosity. Hazelcloud finished her frog with a funny expression, sticking her tongue out with eyes closed in disgust. She scooted closer to continue the conversation easier. "Whatever it was, remember; you're not alone anymore. I don't care what anyone will say, I think you're a fine cat. All of that, whatever happened, it's behind you now. When you're in a clan, you stick together; and you stick close. If you're loyal, then you get loyalty back. If you are kind, you get kindness right back at you. It's a way of life in any clan. Think of it as one, big family. Me, and the rest of the clan, will always be by your side, our pawsteps as one. StarClan walks with us like that, too." She mewed, her soft, youthful voice full of comfort and confidence to her words. Her voice still sounded as if she was an apprentice, slightly loud and with a young tone, kind of high-pitched. It was obvious this she-cat was a new warrior, and she seemed tired, because of her vigil the night before. Her ruffled fur shifted as her paw raised up, and landed gently on his fur in comfort. A warm smile entered her face as she looked at Feralclaw.

He chuckled "Thank you." he meowed gratefully "I've had a horrible life." he mewed "So many dead." he meowed in sorrow

"Anytime." Hazelcloud mewled. "Want to go hunting to take that nightmare off your mind?" She suggested, her fluffy tail flicking.

"Sure, I would love that." he meowed gratefully "And thank you," Feralclaw meowed while giving a slight nod.

"Alright!" She said, bouncing up, and then padding out of the warriors den on the way to the somber forest.

He stood up and bounded out after her when i thought struck him Why did i have that dream? he thought the entire way there

A silver stripped fluffy cat walked into the Warriors den. She stopped and looked at her nest, two thoughts swirled in her head. One I won't be staying here for long, gonna have to move to the nersury. Another I wish Terror was here... hopefully the Clan would understand. she thought to herself as a flash of hope but sadness went through her hazel green oarbs as shewalked to her nest.

The queen found her den and there did she cry but also felt the stress of losing her adopted kit.

"Wishingfeather?" Feralclaw called "Im sorry, and Talonpaw has something he wants to say to you." He meowed

Terror appeared at the den entrance and saw the state Wishingfeather was in. Terrors shoulder was soaked in blood but he didnt seem to notice. He was crushed at seeing his mate so sad. He nuzzled her gently "Hey, its ok.. Look at me, its going to be all right. We're going to talk to Howlingstar and get this all sorted out.. ok?" he spoke in a soft soothing voice his eyes warm.

The fluffed she cat looked up to noded at FeralClaws apology before glancing at Terror. It took a few heartbeats to regester the shoulder wound, "what happened to you?" She compleately pushed away his calming words. Getting up did she clean the would to the best of her ability before sigh. "I heard you guys out there... I need to talk to him. He isn't a disgrace, nor am I. Stay here I'll be back." She said softly before getting up and walking out of the Warriors Den and followed his scent trail.

"Talonpaw bit my shoulder" he sighed seeing it was no use to try and comfort Wishingfeather. He limped after his mate his tail flicking.

Page 9 of 9
Permissions in this forum:
You cannot reply to topics in this forum
Log in
Weather
Current Weather: The season is Newleaf (Spring). The storm is over and the sun is currently out. It is warm, but, there is a very cold breeze.
Current news
Current Plot: Three foxes have been sighted on three different clans grounds..Will the clans be able to fight them off without losing the lives of their warriors? While, in Washaki, a new celebration is about to take place. Ravinto, a festival for thanking the Gods for prey. Also, in other news, the two-legs have decided to build a Thunderpath running along ValiantClan territory and Two-leg territory. This acts as their new border.
Bans
Current Bans: No.
Top-Sites