Fenris poked his head into the entrance of the den, and with a hesitant gulp of air, he steps into the den. No... his and his mate's very own den... for the first time. Did he deserve this? Fenris really could not tell. But once he gazed around the den, the sense of uneasiness had vanish instantly and a thin, but happy grin stretched across his muzzle. "So.." He murmured softly, his eyes now meeting the ground. "...this is what it's like, to be part of a pack."

Dakota ran in, howling a wild cry of delight. "Hello!" He hurled forward, landing on the Beta's tail. "Woaah! You're the Beta, aren't you?" He tilt his head, grinning. "I'm Dakota!"

Fenris couldn't help but flinch at the sudden weight on his tail. "Oh! Hello." He chuckles looking over his shoulder, returning the grin. "I'm the Beta alright! I'm Fenris."

Dakota revealed a large smile. "That's so cool!" He exclaimed. "Have you seen my siblings?" A frown smoothed his expression and his black ears were suddenly pinned back.

Fenris tilt his head to the side. "Your siblings? No I haven't seen them- are they hiding from you?" He smiles, crouching down so that he could look at Dakota eye to eye. "I can help if you'd like."

Waya pads in, a warm smile flickering across her muzzle. "Fenris. I missed you. I barely see you anymore. How areyou?" She gently nuzzles her mate and turns to the pup. "Hey, Dakota! What's wrong?" She barked.

"Waya!" Fenris flashed a gentle yet warm smile towards his mate. "I'm great- now that you're here, how are you?" He nuzzles her in return.

Aiyana popped her head in the den, then glanced down to Dakota. "Come out of here at once, you should not be disturbing the Betas," she spoke firmly to her young pup. "Go back to the Cave and play," she kindly smiled to Waya and Fenris. "I'll let you two be," she said as she began to pad away. "Dakota!" She called. xD

She laughs softly. "Its fine." She grins, and playfully tackles her mate, "I barely get to see you anymore." She rolled arouns, feeling playful as she yawned slightly. "I miss you a lot."

"B-But.. Mom!" Dakota whined and obediently followed after her.

He lets out a light laugh. Nibbling on Waya's ear affectionately, feeling rather playful himself, Fenris paws at her with a goofy grin. "I missed you too."

"How are yoh lately?" She rolled over, blinking at him. She,nuzzled him lightlh. "Youre a great beta."

"Not as great as you." A sudden playful grin crossed his muzzle as he tackles her gently. "You complement me too much- you are pretty amazing too, don't forget that." Fenris looks at her warmly.

She laughs, rolling around and smirking, pinning him down. "Thank you," She said with a brief smile. "I don't always feel like that, though."

A slight look of concern glows in his eyes. "Are you alright? You've been rather quiet lately..." He paused lightly smirking, "...More quiet than usual I mean." With a blink he paws at her gently. "Is something wrong?"

She laugha, gentlu swiping his ear then pressed her nose against his ear. "Nothinh‘s wro,g, I promise." She barked, rolling around. "I feel I dont deserve,this rank, sometimes." She shruggrd. "And we‘ve been more busy, so, slightly more tired." She nuzzled hin.

He smiles, feeling a wave of relief wash over him. Nuzzling her slowly he breathed in her scent. "I know what you mean." He agrees, rolling over so that they were laying side by side. Fenris closes his eyes for a moment letting out a soft sigh. "I could just fall asleep right here." He places his nose against her ear.

"I'm glad you do," she pressed her pelt firmly against his, pressing her nose against his ear briefly and nuzzled her mate. She closed her eyes, taking shallow breathes.

"Fenris," Aiyana barked as she appeared at the door to the den. She observed the two wolves then began to smile, shaking her head in content. Love, it's so sweet, she thought to herself. "Sorry to disturb you, when the sun is highest in the sky, I wish for you to announce some patrols to the wolves in the Cave," she said. She bowed her head and padded out.

~ I'll explain my post. I was too lazy to PM you and am in no hurry for these and so I assumed you'd see this sometime and it's cooler this way. xD

Anyway. What I want you to do, seeing as you were our "selected" Beta - we has a job for you! >:3
It's not a biggy. It's basically like clan patrols. But, different. Instead of posting them around to everyone. All you do is make a post in the cave entrance every now and then (every week or.. Whenever you feel like it, but, somewhat often) and basically just say who you want to do what patrols. (Might tell Howly about this and get Pigeon to do it!)

Example: Aiyana padded into the Cave entrance, she glanced around, searching for certain wolves then barked loudly to gain everyone's attention. "Dyani, Gale, Katani, I want for you three to patrol the territory - ensure there are no issues. Shanook, Winter, Waya, you three will patrol the borders with those fluffy squirrels. The rest of you, I want you to split into hunting groups. The pack is scarce for prey and we need all we can get!" (Like this!! :3 Except maybe make sure that the wolves on patrols are SCOUTS. :3 Scouts = SOLDIER WOLVES!!

Waya nudged Fenria. "You should go," she barked quietly.

Asha pads into the den after her mother, before barking, "COME ON LAZY! GET A MOVE ON!" Barks the pup, narrowing her eyes.

SOUNDS GREAT! It's nice that it doesn't have to be a scheduled thing- it makes it seem more natural, and I won't have to rush. Now all I have to do is see how many scouts are in the pack so that I won't have some repeat patrols

I'll get to it, don't worry

Fenris felt himself flush at the scene which the alpha had walked into, eyes wide. He looked over at Waya, smiling apologetically. "Sorry, I need to go... see you soon?" He whispers before leaping to his paws, and disappearing through the mouth of the den.

She nods in approval, following him out.

Waya smiled lightlt and bounds out,

The ground shakes and rumbles angrily. A gust of wind enters and blows dust, dirt and leaves inside the Beta den. Trees shake, their branches cracking off loudly and falling across the entrance to the Beta den. 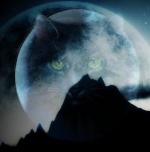 The Stars and Skies
Administrator

Shanook padded past, then frowned, staring at the blocked off entrance to the Beta den. He swore he saw the two Beta's earlier and dashed off to tell the others.

Iris padded to the entrance of the den. "Is there anything you'd like me to do, Beta?"

Occ: Sorry for the delay, guys. Finals week is next week so I've been working my butt off:/

"Aiyana and Okami have asked for us to try and unblock the entrance to the Beta Den," Shanook barked as he re-entered.,

Okami gave a swift nod the Shanook as he entered. He leaned against the branch, wedging his shoulder underneath it. "Let's heave it out of the way," he barked.

Shanook helped the Alpha and got his weight under the branch. He heaved and lifted the branch out of the way. His muscles heaving.

Iris gripped the end with her teeth. "Can you hepth me puth thith outh oth the way?"

The beta makes his way over to Iris. "Need help?" He wedged his large shoulder underneath the branch, getting ready to lift it.

"Thankth" Iris smiled with her mouth full of branch.

Shanook gave a grin to Fenris and Iris then pushed the branch some of the way, making a small gap in the entrance.

OOHH. This still hasn't been done?

The Alphess bounded over to the male wolves, "Nearly," she said, smiling warmly to them. The Alphess got underneath the branch then pushed her shoulder against it, causing the branch to move forward. She pushed further, making the gap wider again. "Both of you help me and we should be able to make the branch fall, leaving the Beta den free to enter and exit."

I almost forgot about this. Thanks!

The Beta gave a grin to Aiyana, happy for the help. "Ok." He barked moving beside her, crouching down as he shifted his shoulder against the branch. He pushed it as well, the gap growing wider.

The Delta male helped and lifted the branch out of the way.

Fenris casually turned around to see who was speaking, not knowing who it was. "No, but thank you. We just finished-" He began, but then he stopped. Eyes widening with surprise. "Oh, Waya." He steps away from the others and runs up to nuzzle her. "How are you feeling? Shouldn't you be resting?" He asks smiling warmly, but he was panicking inside.

The Alphess bowed her head then examined Waya, her gaze clouded. "You should be in the Shaman den, resting," she said, firmly. She shook her head and sighed, "You don't want to get worse."

Fenris padded into the now branch free den. A sense of emptiness washed over him, as the faint scent of his past mate caught his nose. With a sigh, he sat down and looked around the den blankly.